Are You Afraid Of Tomorrow?

In the children’s book Guess How Much I Love You by Sam McBratney, father and son Nutbrown Hare attempt to express their love visually. 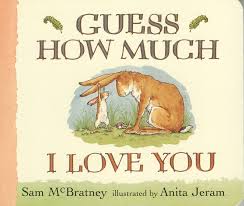 Guess How Much I Love You Book Cover

I enjoy how the father helps his son realize that some things are bigger than even the expanse of his arms.

As the characters attempt to think of increasingly bigger ways to show their love, the reader is able to feel how indescribably infinite love is.

In an article written by the world renowned author of Rich Dad Poor Dad, Robert Kiyosaki, he said, “I would have been far more successful if I were more like Rambo (and less like Pee-wee Herman) - if I’d dreamed bigger dreams, taken on more impossible tasks and had a bigger vision of the possibilities.”

This statement immediately made me think about the lesson Big Nutbrown Hare was teaching Little Nutbrown Hare.

What is Fear of Success?

One day my friend called to check on the progress of my writing. She texted me to see how business was going and she asked what I was working on. I shared that I was going to start doing more research and writing on fear of failure and fear of success. She responded, “LOL. Who has a fear of success?”

Coming from someone who has obtained a certain level of success in her career I understood her uncertainty. We assume that people want success and that this is why they continue their education and go to work every day.

Fear of success happens in the future.

Unlike fear of failure that is normally due to some unrelated memory in your past, fear of success is difficult to grasp because it happens in the future that we are designing for ourselves. No, I’m not saying that you have control over when you die but you can affect a change in the level of success you achieve in specific areas of life that you intentionally work towards and focus on.

Fear of success shows up in self-defeating ways. For example, if you ever stop yourself from attempting something because you are afraid of what others may think, or getting laughed at, or being rejected by peers then you suffer from a fear of success.

A few years back my car was rear-ended while I was sitting at a red light. The person who hit my car never used his brakes so he hit me at full force doing approximately 40 miles per hour. Nothing showed on the x-ray when I went to the emergency room.

The next morning I was in excruciating pain as was to be expected after such an accident. Days later when the pain was getting no better I almost prayed that the MRI would show something, which it did, because I was starting to think that people thought that I was lying about it.

Fear of success is like an unseen illness or pain that only the patient is dealing with. People who suffer from this are often not encouraged or helped because normally they have already achieved a certain status in their career. They appear to have reached the top but they may have an unspoken desire to enlarge their territory in some way.

It is up to each individual to step out of their comfort zone and seek career coaching services to help them overcome their negative thoughts about tomorrow.  Go after those things that you think are unattainable. Find a mentor or coach to nudge you along the journey. Learn to find the fun and the lesson in every failure and every success.